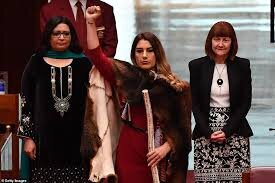 Lidia Thorpe has been sworn- in as the first Aboriginal senator in Victoria today. I can’t explain how proud and moved I am to see Lidia achieve her goal. She cast such a striking figure proudly entering the Senate chamber, wearing a traditional possum skin cloak and holding a message stick that has been etched with 441 lines representing the Aboriginal deaths in custody since the 1990 Royal Commission investigation.

It’s a real shame that it has taken this long since colonisation to have the most basic and minuscule representation in the Senate let alone the Parliament. Being a woman of colour especially an Aboriginal woman in any public role is not easy. The trolls and racists always surface at times like these.

I can imagine it wasn’t easy for her to swear allegiance to the coloniser. In her own words:

“It’s not an easy thing to do as a sovereign black woman to then swear allegiance to the Crown and the very people who caused great harm to this land and the people who belong to it,”

She has done so nevertheless and hopefully her presence will be a force for good in not only upholding the rights of Aboriginal people but of all Australians who want a country free from bigotry, racism and inequality.

She is an inspiration to so many young brown girls. Its again a timely reminder that representation is so important for us and to see her proudly in that role is just so satisfying. I wish her my very best and every success.